Excursions and routes through Val d’Aran

Val d’Aran, or the Aran Valley, is a beautiful enclave in the Catalan Pyrenees. If you are looking for a place to surprise you for a getaway, Val d’Aran should be on your list. It hides precious corners both for the adventurous and for taking your kids.

In this article, I want to focus on the routes through Val d’Aran. It has many options for hiking at any level of difficulty due to its geography. You here find out about the excursions I have done below so that you can find the one that best suits your tastes.

Val d’Aran is a special territory for its location and administration. Located in the northwest of Catalonia and bordering Aragon and France, Val d’Aran is a region anchored in the Pyrenees. The official language of the valley is Aranese (as well as Catalan and Spanish) and it has its own autonomous government, the Conselh Generau.

We find charming towns within Val d’Aran that make it the ideal place to make a rural tourism getaway. In addition, it is the ideal place to ski in the middle of winter, on the popular slopes of Baqueira Beret. On this map you can see the location of the routes that I am going to tell you about:

Val d’Aran is located in the Central Pyrenees and it will be necessary to drive along a forest track for some of these routes. even though you do not need a 4×4 to drive up, my 15-year-old Citroen Xsara would not have been up to the task. I borrowed a car from a relative to make this trip. 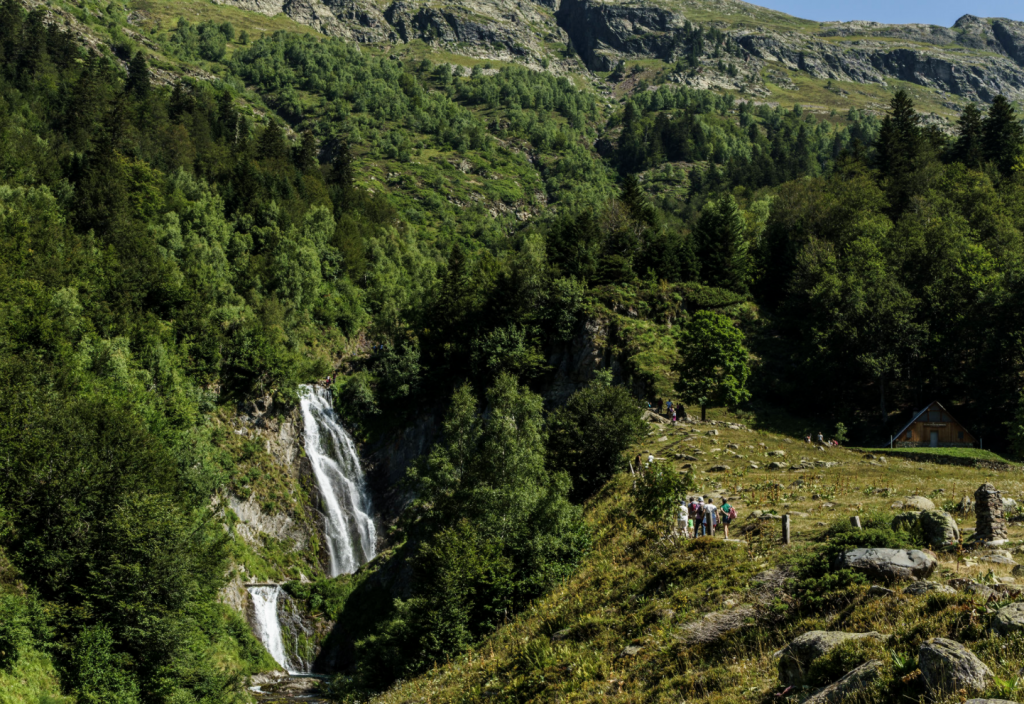 Turn onto a narrow two-way road from the town of Arrós with unpaved parts where the Saut deth Pish is indicated. You will have to drive about 9km until you reach a large free parking which is a few meters from the waterfall. You can go up to the highest part of the Saut deth Pish, take a short route around the area, or get your feet wet in the small lake next to it. 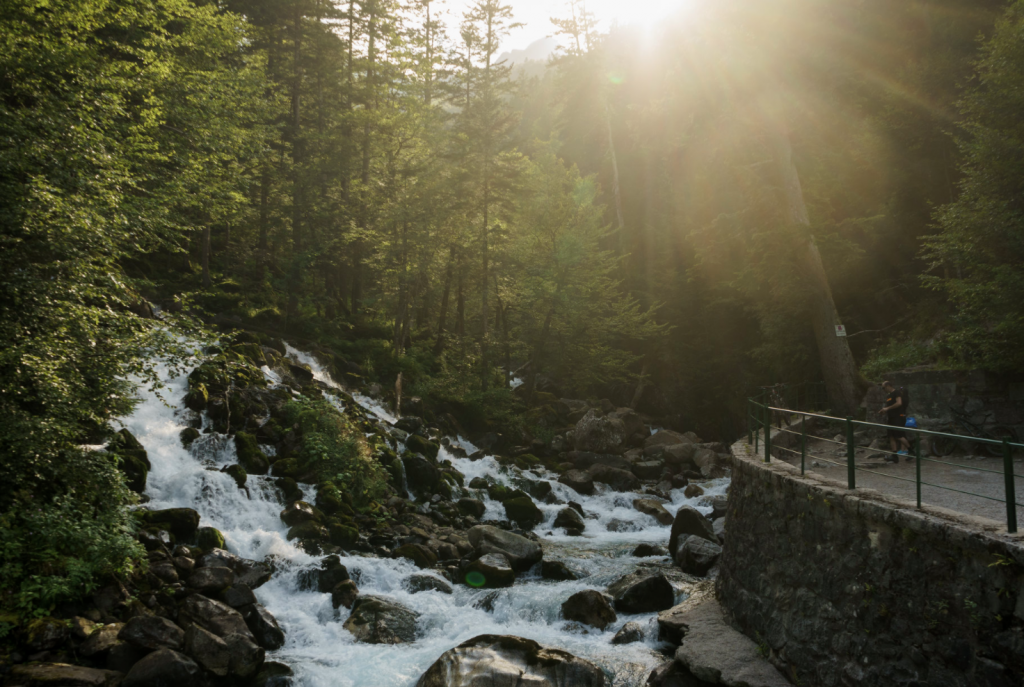 One of the essential places to visit in the Val d’Aran is the route to Uelths Deth Joèu or the eyes of the devil. It is a beautiful waterfall that comes from the Aneto glacier after covering 4km underground.

I recommend following the route crossing the bridge that is in the same waterfall and climbing up the side of it. It is a climb with a considerable drop but short in distance and can be done regardless of one’s physical shape. After that, you will follow a flatter path that will take you to the Artiga de Lin and the refuge. You will find a beautiful valley in front of you to walk or even stop to eat.

I walked along the road that starts at the Artiga de Lin refuge to get back to the parking lot. 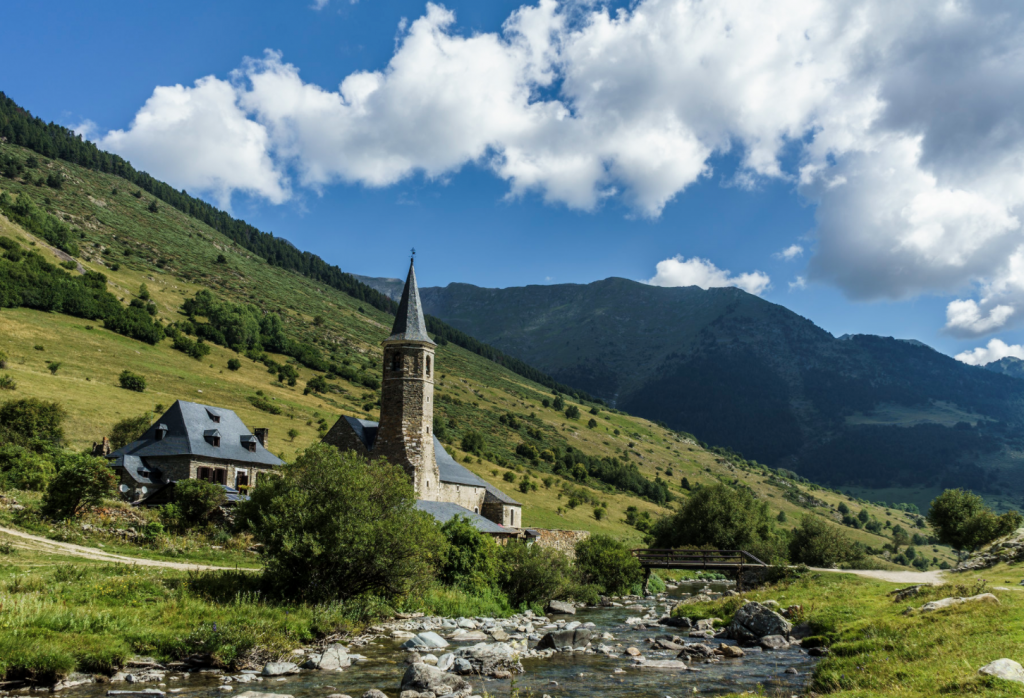 The Pla de Beret plane is located at an altitude of 1,860m and is an ideal place for hiking through the Val d’Aran. This is the source of the Noguera Pallaresa River as well as the Garona River and is where the famous Baqueira Beret skiing station is located.

There are several activities and routes to do in this area but the one I recommend, as well as the most popular, is to go to Montgarri. You can drive to Montgarri if you prefer and take a walk around once there.

Montgarri is, or was, a small town where the Noguera Pallaresa river passes through. There were barely 4 registered residents in the town in 2009. At an altitude of 1,645m, Montagrri is in front of a beautiful spot but also has extreme temperatures and little connectivity. That is why it was slowly abandoned and we can see small ruins today of what used to be houses once. Even so, the Montgarri Sanctuary with its church still stands, as well as the mountain hut that has a small restaurant and shop. 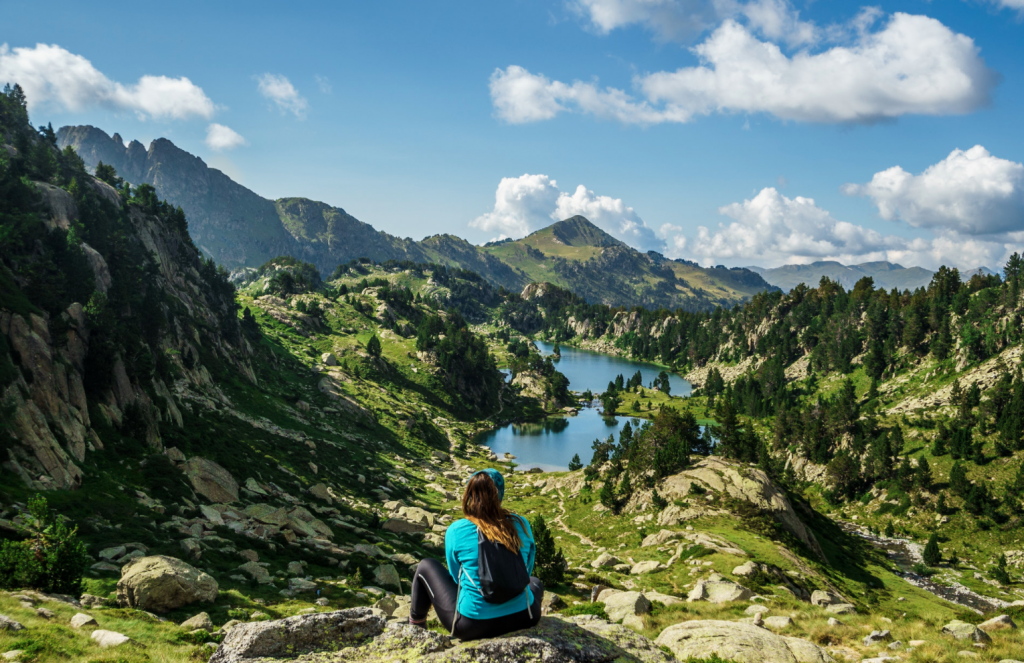 The first route I did in Val d’Aran was the Circ de Colomers. I knew it would be the most complicated part of the trip and I did not want to leave it for the last few days. You can do dozens of routes in the valley but this is one of the best routes I have ever done without a doubt.

Circ de Colomers is a glacial head that has peaks with an altitude of more than 2,500m and more than fifty lakes. This place is a treat of nature. The image above shows just a little of what you will see if you decide to follow the same itinerary.

The route’s starting point is in Banhs de Tredos at the altitude of 1.768m and runs through the high mountains. You can get to Banhs de Tredos from a detour in the town of Salardú. Once there you can:

From there you start the trail which will take you to the great Colomers lake and the Colomers hut. This is where you have to choose between taking the short or long route. The first route takes about 2h and will take you to three lakes in total. I did the route of the 7 Colomers lakes which takes you almost to the foot of the Gran Tuc de Colomers (2,933m), the highest peak in the area that is part of the Aigüestortes and Sant Maurici National Park. the views after reaching a height of 2,600m and were stunning.

There will soon be an article detailing this route since I think it can be useful for those who think about doing it and explain why you pass lakes and what are the sections of the route with greater difficulty. It is not a technical route, but I do not think it is suitable for everyone. There were areas, especially downhill, where you had to help yourself hand and foot to be able to climb down the rock. It is not a simple walk in the mountains.

I decided to make a simple summit to finish the getaway through Val d’Aran. Among the various options, I chose Mount Moncorbison, which is very close to the capital of the valley: Vielha (or Viella in Spanish). There is a road adjacent to Vielha, from the town of Gausach, that takes us to Bassa d’Oles after about 7km. You can park there and start the route.

The Moncorbison is a 2,172m peak from where we can admire the entire valley with its different towns and a beautiful panoramic view of the Pyrenees. The route starts at about 1,600m of altitude and runs in a constant ascent along with one of the slopes and is quite simple. It can be monotonous due to the constant slope but the route is beautiful and easy.  The views are spectacular once at the summit.

When you reach the top of the Moncorbison, I advise you to go to the Tuc de Letassi (2,169m) which is accessible through a simple and wide ridge. It is a great way to say goodbye to Val d’Aran with 360º angle views. I followed this track to make the route.

So ends my bit on the routes and excursions through Val d’Aran. I hope you have taken note of all of them and are encouraged to do them. Val d’Aran is a beautiful place and has a lot to see.

This site uses Akismet to reduce spam. Learn how your comment data is processed.

This website uses cookies to improve your experience while you navigate through the website. Out of these, the cookies that are categorized as necessary are stored on your browser as they are essential for the working of basic functionalities of the website. We also use third-party cookies that help us analyze and understand how you use this website. These cookies will be stored in your browser only with your consent. You also have the option to opt-out of these cookies. But opting out of some of these cookies may affect your browsing experience.
Necessary Siempre activado
Necessary cookies are absolutely essential for the website to function properly. This category only includes cookies that ensures basic functionalities and security features of the website. These cookies do not store any personal information.
Non-necessary
Any cookies that may not be particularly necessary for the website to function and is used specifically to collect user personal data via analytics, ads, other embedded contents are termed as non-necessary cookies. It is mandatory to procure user consent prior to running these cookies on your website.
GUARDAR Y ACEPTAR